Internship: Immunology of the eye

Home/Internship: Immunology of the eye 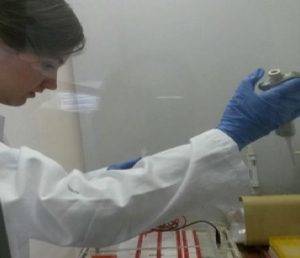 As another regional winner of the DNO, I could experience a student research internship which was organized by the DNO Team. Thanks to them I could stay at the “Langmann Lab”, a working group whose primary topic is the experimental immunology of the eye (a component of the CNS). The lab is located at the university hospital of cologne (Uniklinik Köln). As in most scientific labs most of the staff consists of Post-Docs, PhD-students, technical assistants and administrative personal, while the lab is supervised by a professor whose task it is to develop the research strategy and organize the formal conditions, including the financial supply and team structure. Each member does research on a certain project they are responsible for. In addition, the team members cooperate to teach neuroscience students.

These two pictures below show a retina; the left one is extracted while the right one is stained.

The main target of research at the Langmann Lab is microglia cells which are a type of immune cell in the retina of vertebrates. Though the task of microglia is to protect the residing neurons from stress, there are many maladies in which their malfunction harms the photoreceptors and other neurons of the retina thus leading to visual impairment and finally blindness. So, microglia are potential targets for therapy. Using mostly mice-models the scientists delve into diseases like AMD (age-related macular degeneration), where leaky blood vessels may grow into the retina and lead to the death of receptors and Retinitis pigmentosa, where the photoreceptors are genetically impaired, thus causing degeneration. To perform their research they apply a broad spectrum of biotechnological methods like e.g. western blotting, which is used for identification of proteins, Realtime-PCR that detects the “biological needs” or correctly the mRNA changes of a treated sample, OCT (optical coherence tomography) which enables one to have a closer look in vivo at the eye and width of the retina, RPE (retinal pigment epithelium) and choroid, FFA (fundus fluorescence angiography) that detects the blood vessels in the eye and their potential leakage, histochemical stainings, which show for example nuclei and microglia and many many more.

This for example is an immunochemistry- staining I did together with a Post-Doc at the Lab, Dr. Moran Homola. The slice of the retina is 12 μm thick and had to be cut with a cryostat, a machine designed to slice tissue in order to stain it. The blue dots are nuclei. The retinal layers are titled with abbreviations whereby ONL means “outer nuclear layer” and contains the nuclei of the photoreceptors. The seemingly empty layer that displays some of the green structures, which are microglia, depicts the axons of the photoreceptors and is called “outer plexiform layer” (OPL). The next layer, which comprises many blue dots again is the “inner plexiform layer” (INL) where the somata of the bipolar cells are to be found. Afterwards, you can see another apparently empty layer that encloses the axons of the bipolar cells, this time, it is the “inner plexiform layer” (IPL). The single blue dots at the bottom are the nuclei of the ganglion cells which built the optic nerve. In the picture they are labelled as “ganglion cell layer” (GCL).

Apart from pipetting and staining there are many other properties I learned about working in science and what is important for it: Firstly, it is a lot of work and even small steps like washing samples or mixing ingredients for a PCR (amplification of DNA) take considerable amounts of time. You sure become practiced after some time, but you still need to concentrate on every small step since there are uncountable possibilities for mistakes that could spoil your experiment. So you need to consider every single detail of your work, because you won’t realise many m

istakes until the next steps of your experiment. Secondly, you must be exact (or sapient enough to know when you do not) and tidy. To avoid contamination the workplaces must be clean and you need to label your samples in order to organise not only your work but also to prevent confusion with your colleague’s samples. Furthermore, you learn to deal with frustration, not only in the beginning where many errors occur due to lack of experience, but all the time; machines may work incorrectly, antibodies may be produced flawed and sometimes it is even luck that decides if an experiment is destined to success or not. Moreover, the average scientist does not spend their whole time at the lab experimenting with chemicals or animals, but they also need to spend hours working at their PC, whether it is careful documentation of experiments in the lab book, the Big Data that comes along with every experiment or reading papers to stay in the loop, half of your work time will be set at the computer. Scientist need to have a lot of stamina as some studies or experiments endure unplanned for many years or some things just do not work accurately. In addition, autonomy is an important quality scientific work requires. Mostly, everybody working at a lab has their own project they need to conduct and advance, so you need to organise your time especially when it comes to e.g. machines which you share with your colleagues, otherwise you won’t advance and the atmosphere at the lab will tense. Science additionally pushes against the borders of technology because even though there are many modern techniques, some still do not exist or are too expansive for some budgets. À propos expensive, scientific work is ultra-costly. There are not only the big machines which are expensive but also some purification kits for RNA/DNA or antibodies for staining etc. So it is not surprising, that a lab needs to provide good results and excellent publications in order to make do on their finances.

But if one is interested and motivated they will overcome the obstacles and profit from the upsides of scientific work e.g. working together with people who share your interests and never work entirely alone. Although I heard many prejudices and clichés about working in science like bossy people and the competition and even if some scientists confirmed these to some extent, I did not experience those in Cologne. Whenever somebody needed advice from others, they got it and when there was a problem with something, people helped and explained issues. At first sight it might seem that a scientist’s work is exhausting but it is rewarding to work on interesting correlations and after you received your results, even if it is just for one moment, you are the only person in the world who knows about that circumstance. After all the great inventors and scientists in the world, you can contribute to the knowledge of the entire human race. I think this is quite a motivation to persevere, once things do not happen as you like.

As a conclusive statement, I paraphrase some thoughts Dr. Homola expressed about her motivation for her work: She voiced that there are many diverse and interesting projects whether in-vivo or in-vitro that seek for a therapy, so in contrast to fundamental research, the welfare of the patient is in focus. She also said that she takes much pleasure in her work despite some problems. Furthermore, since scientific work is extremely rich in variety you never stop to learn about new methods and facts.

This internship was a fascinating, joyful and enriching experience for me which will help me to find out what exactly I am aiming for in the future. I thank the staff of the Langmann Lab for showing and explaining to me what they do and for letting me experience their scientific work!