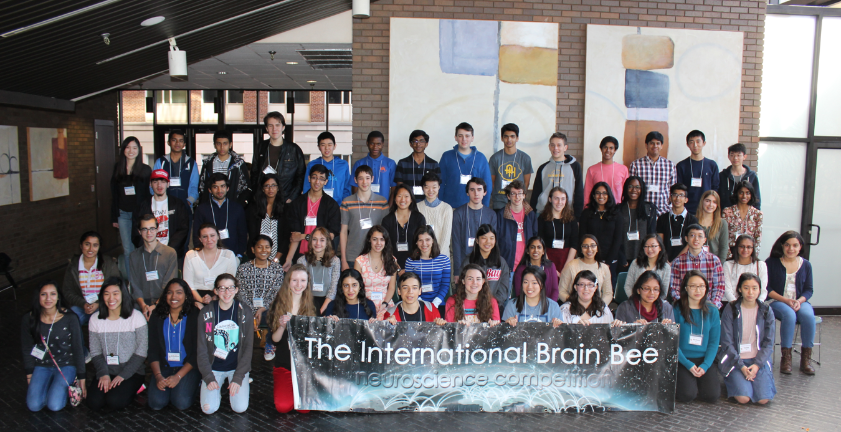 Future neuroscientists from around the world met in Washington, DC this week to compete in the nineteenth World Brain Bee Championship. The Brain Bee is a neuroscience competition for young students, 13 to 19 years of age. It was hosted by the American Psychological Association.

The International Brain Bee President and Founder is Dr. Norbert Myslinski of The University of Maryland Dental School, Department of Neural and Pain Sciences. He states that the purpose of the Brain Bee is to motivate young men and women to study the brain, and to inspire them to consider careers in the basic and clinical neurosciences. We need them to treat and find cures for the 1000 neurological and psychological disorders around the world. The Brain Bee motto is “We Build Better Brains to Fight Brain Disorders.”

The 2017 World Brain Bee Champion is Sojas Wagle (pictured), a sophomore from Har-Ber High School in Arkansas, USA. Sojas has a breath taking history of accomplishments. He is the captain of his school’s Quiz Bowl Team, and was state MVP for the last two years. He placed third in the National Geographic Bee in 2015. Last year, he was chosen for “Who Wants to be a Millionaire” Whiz Kids Edition. By the end of the game show, he had won $250,000, and later donated some of his winnings to his school district and a children’s hospital. He is also a member of the Arkansas Philharmonic Youth Orchestra where he plays violin as first chair.

While in the US, twelve DC Ambassadors invited their respective national champions to visit their embassies to be honored, including India, Kenya, Egypt, Ukraine, Korea, Israel, Italy, Malaysia, Singapore, Japan, Australia, Poland and Germany. The Brain Bee involves more than knowledge; it involves relationships. It is an instrument of peace. The friendships and mutual respect developed during the Brain Bee will last a lifetime.

The International Brain Bee absolutely confirmed my plan of study. It not only opened doors to my mind, but I am sure it will open doors to my chosen university. – Julius B. (Germany’s Nationals winner)

The Brain Bee competition has three tiers.  Worldwide there are about 200 local Chapter competitions, each one involving many schools. The winners of those then compete in their respective Regional (National) championships. The Regional winners then go on to represent their countries in the World Championship. They are tested on their knowledge of the human brain including such topics as intelligence, emotions, memory, sleep, vision, hearing, sensation, Alzheimer’s disease, Parkinson’s disease,  schizophrenia, addictions and brain research. The competition involves oral tests, a neuroanatomy laboratory exam with real human brains, a neurohistology test, and a patient diagnosis component with patient actors. Sample questions include: What kind of molecules are semaphorin, ephrin, neuropilin and plexin? Sonic hedgehog is important for the development of what part of the nervous system? What is the medical term for when you start dreaming before you fall asleep? Stargazer mice are experimental models for which type of epilepsy? The winner will receive $3000, a trophy, and the right to represent the Brain Bee around the world.