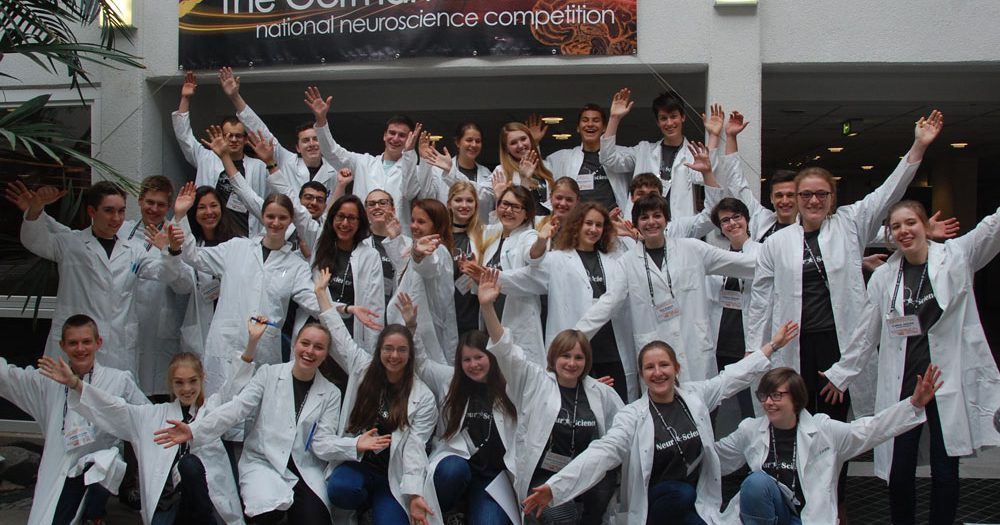 Congratulations to the 2014 Nationals Participants! In its fourth iteration, 2014 was a record-breaking year for the German National Neuroscience Competition, held on Saturday, May 10th at Heidelberg University. Not only was this the largest program with thirty-eight student participants from all corners of the nation, but the number of schools engaged with the program exceeded 50 in the lead-up to the event, resulting in an incredibly high level of talent!

The 2014 German Brain Bee Champion is Mara Schubert, a 12th-grade student of Stromberg-Gymnasium and resident of Oberriexingen. Following the Neuroanatomy, Neurohistology, Patient Diagnosis, Written, and Live Judging Sections, Miss Schubert ranked highest among the participant pool, tied with one other student. But it was not until the final live question-and-answer round, facing three neuroscientist judges, when she upheld a perfect streak of accurate answers throughout ten rounds of the competition’s most difficult questions. Miss Schubert will travel to Washington, DC, USA in August to represent the Republic of Germany at the International Brain Bee Competition, hosted by the Annual Meeting of the American Psychological Association.

In 2nd Place was Luca Stier of Helmholtz Gymnasium Heidelberg. Tied for 3rd Place were Oliver Eichmüller of Liselotte Gymnasium Mannheim and Katarzyna Karpa of the Englisches Institut Heidelberg. Placed 5th was Katrin Duttlinger of Ludwig-Frank-Gymnasium. Each of the top-five winners received Amazon gift cards.

Organized by neuroscientists, PhD students, and medical doctors of Heidelberg University, the German Brain Bee program continues to be sponsored primarily by the HBIGS International Graduate School of Cellular and Molecular Biology and the CellNetworks Research Cluster. The three Heidelberg University neuroscientists that served as judges were Prof. Dr. Armin Blesch, Director of the Laboratory for Neuroregeneration at the Spinal Cord Injury Center, Prof. Dr. Stephan Frings, Coordinator of the Interdisciplinary Neurosciences Centre Masters Program, and Dr. Lucia Poggi, of the Neurodevelopment Division of the Centre for Organismal Studies.